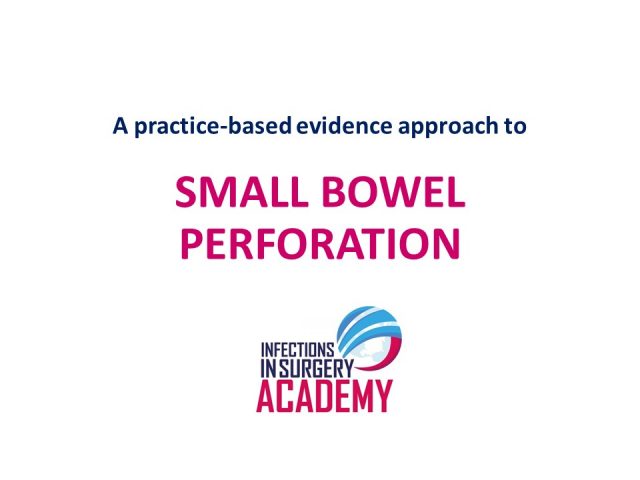 Non-traumatic small bowel perforation is uncommon but can be fatal. Typhoid fever and tuberculosis are the common causes of such perforation in the developing countries, while in western countries non-infectious etiology such as Crohn’s disease and malignancy is more common.
Typhoid fever remains endemic in Asia, Africa, Latin America, the Caribbean, and Oceania. Ileal perforation as complication of typhoid fever and enteritis is a major public health problem in many areas worldwide because of its persistent high morbidity and mortality. Typhoid ileal perforations have a mortality rate up to 60%. In the CIAOW study, according to stepwise multivariate analysis, the presence of small bowel perforation was an independent variable predictive of mortality. Typhoid fever is characterised by fever, headaches, joint pains, profound weakness, diarrhoea, acute respiratory symptoms (cough), a maculopapular rash and abdominal pain.

– Open or laparoscopic surgical primary closure (minor symptoms and with perioperative findings of minimal peritoneal contamination of the peritoneal cavity).
– Resection and primary anastomosis. In the setting of typhoidal perforation, although closure in two layers of single perforation with relatively healthy tissue after refreshment of the edge seems an acceptable option, resection of the unhealthy tissue segment with primary anastomosis of healthy edges about 10 cm on each side of the perforation is recommended.
– Limited right hemicolectomy
1. Stoma creation (critically ill patients or severe inflammation and oedema of the bowel, resulting in friable tissue which precludes anastomosis).
+
Antibiotic therapy for 3-5 days